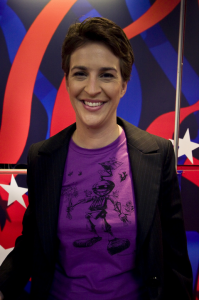 Rachel Maddow has been a media darling ever since her show, The Rachel Maddow Show, aired for the first time in 2008. She is popular for her straightforward approach to politics, her frank analysis, and her sharp wit. Maddow is also respected for being the first openly gay primetime news anchor on the air. She destroyed every stereotype of what a female news anchor “has to be.”

Maddow is a role model for lesbian women in her fearless attitude toward coming out: she said recently that “Gay people – generally speaking – have a responsibility to our own community and to future generations of gay people to come out, if and when we feel that we can.”

Read the rest of her profile here.