Among the 1000s of blog posts, angry articles, and calls for protest and boycotting that have been flooding the media this month against the Boy Scouts of America and Chick-fil-A, it’s easy to forget all the gay-friendly brands that don’t shy away from showing their pride. So today we’re highlighting companies that welcome everyone, no matter who they love. 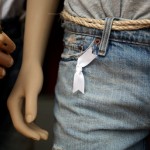 Levi’s has had a reputation for being one the most gay-friendly brands for a long time: in 2008, the San Francisco-based company filed an amicus brief with the California Supreme Court that detailed the economic advantages of same-sex marriage, and in 2009 they joined the White Knot movement, tying white ribbons to their mannequins that symbolize marriage equality. They also filmed two similar commercials with different endings: in the first, the protagonist finds his “dream woman” at the end, but in the second, the protagonist finds his “dream man.”

EA, one of the biggest video game companies in the world, has recently publicly denounced the Defense of Marriage Act, an act that defines marriage as being between a man and a woman. Last year EA joined the It Gets Better Project, a project that columnist Dan Savage created to show LGBTQ youth that their teen years are the hardest, but that their lives will get better. EA has also proudly stated that, “EA shares the ideals and applauds the work of the Human Rights Campaign and we will continue to promote and support initiatives for our gay, lesbian, bisexual and transgender employees.”

On June 25th, Kraft Foods posted this photo of a rainbow Oreo cookie with the caption, “June 25th Pride”:

The photo received an enormous response, without hundreds of thousands of comments, most of them positive. The associate director of corporate affairs, Basil Maglaris, explained that “Kraft Foods has a proud history of celebrating diversity and inclusiveness. We feel the Oreo ad is a fun reflection of our values.” We hope that Kraft Foods continues their support. 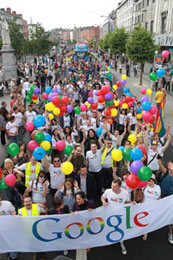 It never hurts to have an ally like Google. Google officially announced its “Legalize Love” campaign earlier this month, a campaign that promotes LGBTQ rights and “safer conditions for gay and lesbian people inside and outside the office in countries with anti-gay laws on the books.”

Google also proudly partners with organizations like the Human Rights Campaign, the Trevor Project, Out & Equal Workplace Advocates, the Transgender Law Center, and many more. Google Chrome also created a video for the It Gets Better project, and the video received more views than President Obama’s own It Gets Better video.

Yeah, yeah, we know the stereotype. But Subaru was actually the first car company to offer benefits to same-sex partners. While a Subaru spokesman confirmed that “We are definitely perceived as gay friendly,’ he also emphasized that “We believe in fairness for our employees.” Subaru also has a history of advertising in Out Magazine and The Advocate, their advertisements have historically featured lesbian tennis-players like Maria Navratilova or Dana Fairbanks, and they’ve used slogans like “It’s not a choice. It’s they way we’re  built.” We feel the same way, Subaru.