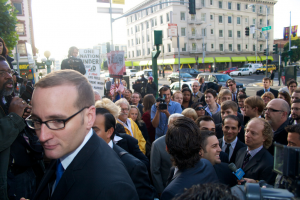 Since Chad Griffin‘s first position in the Clinton administration, as the youngest staffer to ever work in the White House, he has been learning how to rally for his cause. He honed his skills in California as he campaigned for multiple ballot initiatives, and he was instrumental in the battle against Proposition 8. Now as president of the Human Rights Campaign, Griffin will be kept even busier as he is forced to address a much wider range of issues that affect the LGBTQ community.

As the country’s values seem to swing in favor of same-sex marriage and gay rights, the world watches as Chad Griffin takes the helm of the country’s largest civil rights organization focused on LGBT issues.

Read the rest of his profile here