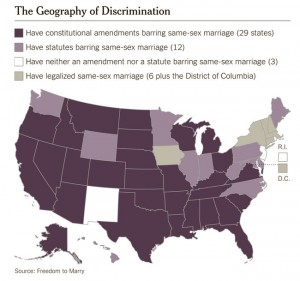 To follow with the theme of political discussions centering around same-sex marriage disputes, here are some fast facts on just how long same-sex marriages have been legalized in the United States, where it’s already legal, and where it was legalized before the U.S. got in on the action. The first jurisdictions to legalize same-sex marriage were the Netherlands, Belgium, Ontario, British Columbia, and Quebec. The sixth jurisdiction to legalize gay marriage (but the first in the United States) was Massachusetts (much to the chagrin of Mitt Romney) on May 17, 2004. Massachusetts was followed by Connecticut in 2008. In 2009, Iowa, Vermont, and Washington D.C. followed suit. New Hampshire legalized same-sex marriage in 2010 and New York did the same in 2011.

Clearly, valiant attempts to pass this legislation are being confronted with opposition that is stronger than our support. In order to show that we are serious about supporting our LGBT family, we cannot remain submissive and silent. What we need are voices – OUR VOICES. This is not a movement that we can simply observe. It requires participation – from EVERYONE. Write your local government, your state government, your friends. Share articles like this one, supporting gay marriage and demonstrating how poorly we’re doing on a national scale to spur the movement. We can do this, but it will take effort. It will take words. It will take action.