Why ‘Pro-Family’ Can’t be Anti-Gay 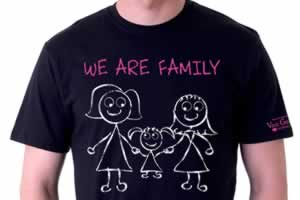 Cyndi Lauper’s Give A Damn campaign T-shirts to fight homophobia. This T-shirt was designed by campaign supporter Jane Lynch.

In an article on the Huffington Post, author Padraig McCoid urges LGBT activists to “take back ‘Pro-Family.’” What he’s referring to is the fact that these days, anti-gay groups are labeling themselves pro-family.  It’s not hard to see why—“pro” has an immediately satisfying positive effect. It sounds like something good, but it’s not.

McCoid points out in his article that so-called ‘pro-family’ groups are anything but. The actions taken by these groups don’t help families—in fact, they often break them up. They “make them struggle financially and demonize families that do not fit into the traditional ‘nuclear model.’” Some organizations work actively to prevent LGBT people from gaining domestic partnership or marriage benefits.

And despite the fact that many gay couples have perfectly functional, normal, happy families, they are being labeled as abnormal and unwanted by these groups. They teach our children that being gay is a bad thing, and that gays are an abomination. And when a gay family member comes out, it seems like the last thing it ought to be labeled as is ‘pro-family.”

Pro-family ought to imply that those activists are supportive of strengthening familial bonds of unconditional love—especially for those that face additional hurdles for being LGBT. Anti-gay groups can’t fairly hold both titles—anti-gay and pro-family are mutually exclusive. The “real” pro-family advocates, McCoid asserts, are those people who support LGBT families and rights.