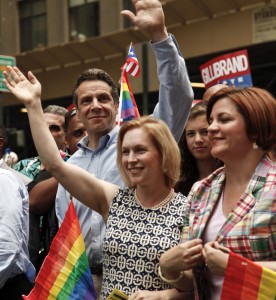 In the scheme of things, this is a huge win for the LGBT community. The number of states allowing same-sex marriage or civil unions is growing, but there have also been many appeals and much opposition along the way. And though the pro-LGBT community is also challenging acts like DOMA, it’s still a long road until victory.

But the fact that the Court of Appeals declined to hear the appeal is cheer-worthy news for New Yorkers. Because of this decision, it’s not likely that any other similar appeals will be considered, either. Governor Andrew Cuomo, who was a major proponent for the same-sex marriage law that was passed in 2011, applauded the court for their decision.

“With the Court’s decision, same-sex couples no longer have to worry that their right to marry could be legally challenged in this State, “ he said. “ The freedom to marry in this State is secure for generations to come.”

States like California haven’t been so lucky. California’s 2008 Proposition 8 eliminated the freedom for LGBT people to marry. This year the Supreme Court will decide whether or not to grant review to Hollingsworth v. Perry, which is a federal constitution challenge to the proposition. New Yorkers need not worry about their marital status being challenged at the State level any more.

DOMA (Defense of Marriage Act) will be reviewed by the Supreme Court on Tuesday, November 20th. The act, enacted in 1996, prevents same-sex marriage from being federally recognized.