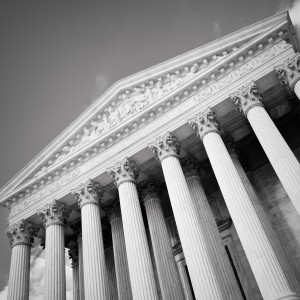 The United States Supreme Court has agreed to review two cases revolving around bans on same-sex marriage. California’s Proposition 8 will be heard, as will the federal Defense of Marriage Act (DOMA). Chances are that, whatever the Court’s decision on these cases, it will be a historical moment for the United States.

In an interview with PBS, Marcia Coyle of The National Law Journal explained possible outcomes of the cases as they stand. The judges could choose to rule very narrowly or broadly, determining how far-reaching the consequences would be.

Granted the parties involved, including the U.S. government, are properly before the court and it reaches the merit of the cases, the Court has many options at its disposal.

But opponents argued “Proposition 8 was unconstitutional because it took away a right once given. And it did that on the basis of animus [toward homosexual people].” Now the question being asked of the Supreme Court is whether or not the 14th Amendment “prohibits California from defining marriages as between a man and a woman.”

The Court’s narrowest ruling would be to confirm the previous ruling that declared Proposition 8 as unconstitutional. This would only affect California laws. But the Court could also go broader in their ruling, declaring that Proposition 8 violates the 14th Amendment of the federal Constitution. If that were the case, then other state laws could also be affected.

As far as DOMA is concerned, the options are much more limited. DOMA isn’t being challenged as a whole; rather, just Section 3, which “defines for all federal purposes marriage as between one man and one woman,” is being questioned. Edie Windsor of New York married her partner of 40 years in Canada and New York recognized their marriage. But when Edie’s spouse later died and left everything to her, Ms. Windsor was slapped with nearly $400,000 in federal estate taxes.

Other legally married couples, differing only in that they were heterosexual, would not have had to pay the same taxes. The challenge to DOMA is that it violates the 5th Amendment of the U.S. Constitution that guarantees equal protection.

Even the broadest possible ruling wouldn’t affect any state laws prohibiting same-sex marriage. Ruling in favor of Edie Windsor would only affect the single provision that guarantees all legally married couples—heterosexual or homosexual—the same protections and guarantees, such as pension, social security, and taxes.