With last week’s Supreme Court considerations, many people were quick to make their position on same-sex marriage and LGBT rights known. And for those celebrities who hadn’t already, it was the perfect time to speak out in support of the LGBT community. That’s just what many did, making statements, tweeting, giving interviews, taking part in discussions, and more.

Beyonce took to Instagram to show her support for same-sex marriage. She posted a picture of a handwritten note that referenced one of her best-known songe: “If you like it you should be able to put a ring on it,” it read. The tag for the photo was #WeWillUnite4MarriageEquality. Madonna posted her own Instagram note as well, writing on lined notebook paper, “Marriage equality! Let’s start a revolution.” 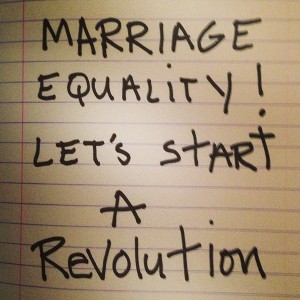 Madonna posted a picture of this handwritten note to support marriage equality.

Another advocate last week was Willie Nelson, American country musician, author, actor, and activist. He gave an interview to Texas Monthly’s Andy Langer. Nelson put it succinctly when he discussed all the inequalities between straight and gay (LGBT) people, saying “I’ve never had a problem with any of it. I’ve known straight and gay people all my life. People are people where I came from.”

Snoop Dogg Lion spoke with Huff Post Entertainment about marriage equality as well, stressing that people should be able to live their lives how they choose—even if that’s different from what others have chosen to do. We are all individuals, and people “can do what they want and as they please,” he said. “Satisfy yourself accordingly.”

Stephen Amell of “Arrow” sent a message out to his Facebook followers in support of same-sex marriage as well. “Some of the most loving, powerful relationships I’ve witnessed have been same-sex couples,” he wrote. “And god knows their houses are always spectacularly decorated and terrific smelling… Here’s to hoping the Supreme Court does the right thing. Equal rights for all.”