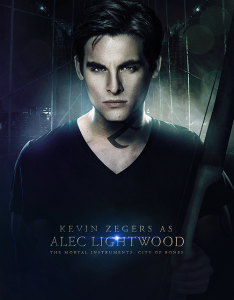 Kevin Zegers stars as Alec Lightwood in The Mortal Instruments: City of Bones

It seems Hollywood is finally catching on to the fact that there are, in fact, LGBT people in the world. And though the movie industry doesn’t always provide us with a realistic portrayal of the world, at least it’s trying to make characters more diverse and believable. Characters who just so happen to be LGBT are showing up with more frequency in big-budget films—characters that, like real people, are dynamic and not simply defined by “straight” or “gay.”

Kevin Zegers is no stranger to portraying LGBT characters on the big screen. The Gossip Girl and Dawn of the Dead actor portrayed Toby in the 2005 film Transamerica. In the film, Toby is a bisexual hustler who turns out to be the son of a transgender parent. Now Zegers is gearing up for the release of his newest film, The Mortal Instruments: City of Bones.

The movie will be based on the novel by Cassandra Clare. In it, Zegers plays Alec Lightwood, who is the best friend of main character Jace. Alec is gay, but that’s hardly what defines him—it is just one of many traits. He’s also a highly intelligent, formidable demon hunter. And just as any straight character’s sexuality and relationships add layers of complexity, so too do Alec’s. In fact, that’s one of the things Zegers says he liked best about the character.

“For me, it makes the character more dynamic. There’s a lot more to work with and his behavior and what he does in the film is not defined at all by his sexual preference,” he said in an interview with Georgia Straight. “[W]hen I read the Mortal Instruments, it was the character that I immediately resonated with because there were so many layers to this guy… I just try to find the character or the film or the director who I think will challenge me the most.”

City of Bones is the first of six books in Clare’s Mortal Instruments series. The first film will be released on August 23rd this year. Portraying an LGBT character used to be considered taboo, and a serious risk to an actor’s career. But times are changing. Zegers says he believes it’s because of the shift in public opinion over recent years.

“Mortal Instruments is a pretty big movie and the fact that the studio feels comfortable with one of their lead characters being gay is pretty indicative of people’s opinion towards that sort of thing, which is that you don’t really have to make a big deal out of it. It just sort of what it is. It’s just one of the layers of the characters that I get to play.”