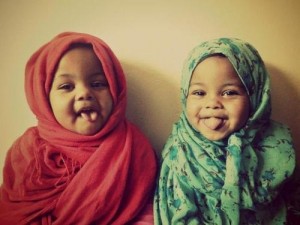 Should children be free to wear what they want, or should parents control those choices?  Many schools at least have a casual Friday.  But what if those clothing choices were considered a safety issue?

According to Al Arabia news, Shiek Abdulla Daoud, a Saudi cleric, insisted that wearing a veil protects baby girls from rape.  The news release sparked widespread outrage and anger.  Many insisted the Shiek be held responsible for his comments.

It begs the question, what about the men who are committing these crimes?  Shouldn’t they be in prison or behind bars?  Is it even possible somebody could blame a baby? And why is it there is no mention of the fact that what he is talking about is pedophilia, a crime in any country.

Masleeza Othman tweeted, “Fatwas on burkas for baby girls are disturbing.  Now the baby victims are blamed for men’s crimes. Allah help us stop the ignorance and stupidity.”

Daoud’s comments have been criticized by senior Islamic officers.  They say there is nothing in Islam that requires baby girls to wear burkas.

Yet abuse is a global problem.  Child abuse is not limited to one economic class, race or religion.  It occurs in every country around the world.  Just weeks after the rape and torture of a 5-year-old in India, headlines announced the horrific news that a 4-year-old had died from a similar situation.

Hopefully, we will not let this topic rest.  Maybe with education and exposing abusers or organizations that allow human trafficking, we can stem this problem.  There need to be tougher laws for those who commit these crimes, and they need to be taken seriously.

In some places, those who are abused are considered to bring shame to their family.  That type of thinking must end now. Women and girls, around the world, should not be afraid to go out alone, to wear what they want or to speak up when abuse occurs.  Women’s rights are human rights.