Dina Goldstein is ‘In the Dollhouse’ Where Ken Carson is Out 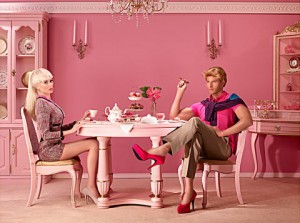 Dina Goldstein’s “In the Dollhouse“

Skeptics and gossips can stop their speculating; rumors of Mattel doll Ken Carson’s sexual orientation can finally be laid to rest at long last. It’s official – he’s gay! Well, at least according to artist and photographer Dina Goldstein, whose recently completed photo-series “In the Dollhouse” depicts Ken and his famous girlfriend Barbie, who is slowly realizing that her man is having an affair…with other men.

The photographs feature real-life models Nathaniel Campbell and Reghan Blake engaged with their glamorous, pink-hued environment in various ways, and illustrate the progression of Barbie’s growing suspicions about Ken. The photographs are stunning; they are exactly what one might imagine Barbie’s dollhouse would look like, and each contain a subtle touch of dark humor, depicted wonderfully by the models, and captured perfectly by Goldstein.

In an interview with the Huffington Post, Dina Goldstein explains what inspired her to take creative liberties in the Barbie and Ken scenario. She discusses beauty and self-authenticity, explaining, 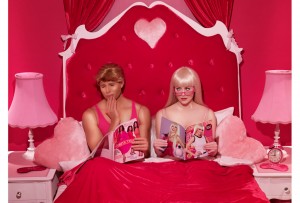 Barbie and Ken reading before bed.

“More than any other childhood construct, Barbie represents the concept that Beauty is Power and necessary to attain happiness. However, when Ken, Barbie’s handsome but emasculated boyfriend, expresses his individuality, the value of beauty as an apex trait is exposed as a cheap, plastic facsimile…So there is no “perfect” and that’s OK. My character “K” finally exposes his true authentic self. He has been enslaved by social expectations and has not found the courage to “come out” and reveal himself to the world. Yes I always thought that Ken and Barbie were a mismatch. In fact, I found out that originally he was designed as her brother not her partner — that to me makes more sense.”

Dina Goldstein’s photographs playfully disrupt social norms, and illustrate a fictional, yet iconic, man’s ability to defy expectations and come out as his true self. Visit the Dollhouse to view the entire series, including Ken’s journey to self-acceptance and Barbie’s grim demise.