Where are all of the best female chefs?

Food & Wine Magazine’s July 2013 issue is hot off the press. Its cover features sprawling text that boasts, “Meet America’s Most Exciting New Talent: Best New Chefs,” under which the bright eyed and beaming faces of said chefs smile proudly up at you. At first glance, you, a foodie aficionado, are thrilled to begin turning the magazine’s pages, but you feel that something’s not quite right with this image. It might take you a moment to pinpoint what’s unsettling about the pictured ensemble of the “Best New Chefs,” but then you’ll see it: of the eleven chefs featured, only one of them is a woman. That’s right, only one. 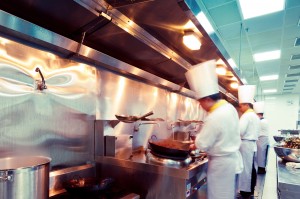 Where are all the best female chefs?
Image: Shutterstock

Since 1978, Food & Wine Magazine has been at the forefront of featuring innovative cuisine, techniques, and of course, recognizing America’s most notable rising-star chefs. In an industry that seems to be growing more respect and an enormous following each year, it’s startling that Food and Wine is recognizing only one female chef deserving of this honor.

According to a recent press release, “FOOD & WINE’s editors choose the Best New Chefs after a months-long selection process. The editors solicit nominations from restaurant critics, food writers and other trusted experts around the country, then travel incognito to taste the food themselves…” Does this suggest that the entire culinary industry only has eyes (and palates) for male chefs? In a months-long, explorative quest to find the Best New Chefs in America using expert food critics’ and writers’ opinions as criteria, it seems strange that Jamie Malone was the only female honored. Even on television networks and televised cooking competitions plenty of female chefs aren’t afraid to showcase their cooking chops, so why does Food & Wine’s prestigious award feel more like a boys’ club and less like a fair portrayal of the best new chefs?

This is not to say that making separate, gendered lists of the best new chefs is a solution, as other publications have done. On the contrary, talented female chefs simply deserve more recognition than they are presently receiving from the culinary industry.