How Do You Talk About Marriage Equality with People Who Oppose It?

Everyone loves a healthy discussion about hot button topics, but when you’re trying to convey your point of view about a meaningful subject, how can you effectively talk about it with someone who fundamentally disagrees with you? How do you talk about marriage equality with people who are against it? 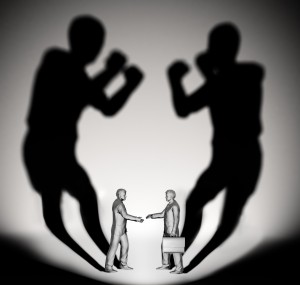 Discussing marriage equality with someone who disagrees with you can be a tricky situation.
Image: Shutterstock

There’s no fully correct way to go about doing this, but there are a few tips you can utilize to make these conversations more of a dialogue and less of a lecture falling on deaf ears. Recently Ken Mehlman, a Republican political strategist, created a video that discusses how to talk about marriage equality with people who are against it. Mehlman is both a gay rights activist and a Republican, so he has much experience with discussing controversial topics with people who traditionally tend to lean one way or the other.

In the video, Mehlman discusses the importance of not making assumptions about other’s views based on their political affiliation, and that it is important to be able to pull examples of gay people in their lives to relate the conversation back to. Mehlman is an openly gay man, and can use himself as an example when appealing to others about the importance of marriage equality. He explains that in his experience, “The best way and the most important way is for them to know someone in their lives, whether it’s a friend or a relative who happens to be gay. And to have that person make the case and explain why they think that civil marriage available under the law ought to be a right, and ought to be something that’s available to them.”

Mehlman also discusses the importance of removing presumptions about marriage based on sweeping theological viewpoints from the discussion, and making it more personal. His idea about marriage is similar to that of many couples, regardless of their sexual orientation or religious beliefs. He says, “what it’s about is two individuals who love each other, who want to spend their lives committing to each other. So that they take care of each other when they’re sick…and so that the people in their community share that commitment and help them out through tough times. I think that goal is something that ought to be available to people whether they’re straight or gay,” allowing his reasons for supporting marriage equality to be more personal, and thus, better received.

His ideas about how to discuss marriage equality with people who oppose it are easy to understand and implement in your own conversations. Do you think that with this approach, more people will be likely to support marriage equality?