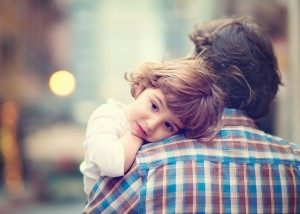 Many support groups exist to advocate for women who choose to or are forced to be “stay-at-home” mothers, but what about dads who do the same? Women make up an estimated 96% of stay-at-home parents, so with only 4% of stay-at-home parents being male, this creates great stigmatization for men who want to contribute to their household by being in charge of daily childcare.

One stay-at-home dad who has been making headlines is Facebook employee Tom Stocky, who just completed a four month paternity leave which allowed him to stay at home with his daughter while his wife returned to work at Google. For many people, four months of paid paternity or maternity leave sounds generous; lots of companies don’t provide such options for new parents, leaving families struggling to balance work, childcare, and daily expenses. Stocky notes the immense privilege it was being able to be a stay-at-home dad for four months (and get paid for it!) but explains that he also encountered discrimination, stereotypes, and other struggles in a public essay posted to Facebook, which hundreds of thousands of people have now seen.

In the essay, his poignant description of his experience during paternity leave struck a chord with many readers, and the most notable issues he encountered were the low expectations people had for fathers, the negative perceptions of working mothers that others expressed to him, as well as the negative perceptions of non-working (or, stay-at-home) fathers. Stocky was stunned at the stereotypes that pervade the lives of people who opt to stay at home with their children, which is devastating to the 96 percent of women who do this and creates stigmas for the small fraction of fathers who do the same.

Being a stay-at-home father for four months was more difficult and more rewarding than Stocky admittedly ever thought it would be. His story not only sheds light on a growing number of men who are curious about being full-time parents, but also shares the social stigmas of such a role. Read his insightful essay about his paternity leave on Facebook here.