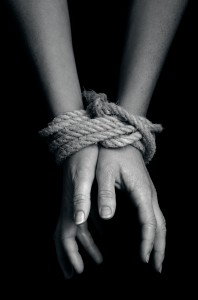 Human trafficking is alive and well in the U.S. and elsewhere.
Image: Shutterstock

Think human trafficking only happens in other countries to other people?  Unfortunately, it’s alive and well, right here in America.  This is the story of Brianna, a high school girl from Washington state.

Brianna was a typical girl in many ways.  She came from a middle class family and was the youngest of five children.  She worked in a diner as a way to save up money for college.  It wasn’t a ton of money, but it was a job.  At school, she earned good grades and was on the cheerleading squad.

One day, a man in his mid-forties came into the diner with his wife.  The two started a conversation with Brianna, asking her about her hopes for school, plans for future work and even the kind of boys she liked.

Red flag: Don’t trust older people who ask you what kind of boyfriend you would like.  That is creepy.

Anyway, she thought the two were just being nice.  However, about a month or two later, the man returned telling her that he and his wife got divorced.  He proceeded to ask her if she would like to party with him.  Code: Have sex with him.

Red flag number two: If a man more than twice your age asks you if you want to party, run far away.  She said no.

However, a few weeks later a different guy came into the diner.  He was tall and blonde, the type she had told the couple she liked.  He was dressed in designer clothes and engaged Brianna in conversation.  She said she liked his Gucci watch, and he said he would like to buy her one to match.  Then he flirted some more and asked her on a date.  She said yes.

He picked her up in a Mercedes and took her to his fancy house in Seattle.  She felt like she was in a dream.  She said she had to go home, but he tried to convince her to move in with him.  He said she could work to earn money for college.  He said his ex-girlfriend worked in a club and danced.  He also said she could make hundreds of dollars per night with barely any work.  Brianna agreed to give it a try.

Her first night she was scared, but she earned over $800.  Nick, the guy she was staying with, was actually a pimp and he realized she could make him a lot of money.  He said he wanted to take her on a trip to Arizona and Nevada.  That could have been the last anyone saw of her.  If the plan had succeeded, Nick would have put Brianna to work on the streets cutting off all family and friends.

However, before the plan could be set into motion, Brianna said she would have to return home and set up a ride home with a friend of hers from high school.  Sensing danger, that friend, Evan, called Brianna’s parents.

When they picked up Brianna, they brought along former Congresswoman Linda Smith.  At first Brianna told them they were crazy and didn’t believe she was being set up.  However, Smith, founder and president of Shared Hope, the national anti-trafficking organization, took her to a café to tell her about how these types of scams work.  Brianna recognized all the lines sex traffickers use and how they were the same ones Nick used to lure her in.

Brianna was 18, but the average age of a girl inducted into sex trafficking is 13.  Brianna was the one that got away.  She was told to change her phone number, job, the type of car she drove and never travel alone.

To help raise awareness of the issue, Brianna made a 20-minute film called “Chosen,” to show middle and high school students the dangers of human trafficking.

She said, “It is a human right to know how these pimps work. I don’t want kids to feel scared when they learn about this. I want them to feel empowered.”