Political Scandal and Strategy in ‘Double Down’ 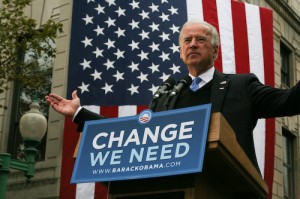 Just hitting shelves this week is “Double Down,” a book that provides a behind-the-scenes look at the 2012 presidential election. It’s the latest from Mark Halperin and John Heilemann, and a follow-up to “Game Change,” the authors’ best-selling book about the 2008 presidential campaign. It’s filled with insider stories about Obama’s path to presidential victory, as well as Republican opponent Mitt Romney’s triumphs and pitfalls.

One of the more provocative parts of the book is the authors’ approach to describing Vice President Joe Biden during peak tactical moments of the campaign. One of the best anecdotes is one of Biden proclaiming his support of LGBT Americans, completely off-script. On May 4, 2012, Biden said, “I am absolutely comfortable with the fact that men marrying men, women marrying women, and heterosexual men and women marrying one another are entitled to the same exact rights, all the civil rights, all the civil liberties,” in an interview that allegedly enraged Obama’s closest advisors and campaign strategists.

According to Halperin and Heilemann in “Double Down,” Obama had been advised to “evolve” on matters of same-sex marriage before Election Day, but was forced to change his approach after Biden’s interview. Political strategist Kenneth Mehlman reportedly told President Obama that the issue of equal marriage “can be a political winner for you” a whole year before the Biden interview, which illustrates politicians’ highly methodical approach to addressing hot button issues. Obama has since come out multiple times in favor of equal marriage legislature, but it is interesting to take a behind-the-scenes look at the political strategy that held him back from making such announcements sooner.

Do you think Obama’s stance on equal marriage is what sealed him a spot in the White House in 2012?