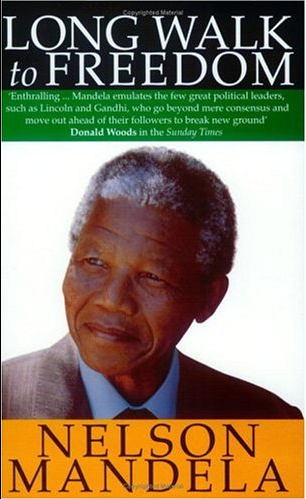 “Long Walk to Freedom” is one of Mandela’s most prolific works.
Image: Steve Lawson via Flickr CC

Millions of people began to mourn on Thursday, December 5th, when news of Nelson Mandela’s death spread out like a great shadow upon the world. Most know him for being a peaceful leader who helped South Africa break from apartheid, for being the nation’s first black president, and for remaining a pillar of justice during the three decades that he was unjustly imprisoned for fighting egregious human inequalities.

It’s easy to quote such a well-known figure, or to share sound bites from any one moment during his remarkable legacy, but instead, why not truly honor Nelson Mandela by critically examining his work? Clara Murphy of Colorlines proposes just that, and offers a “Mandela Reading List” that we could all benefit from.

Taking cues from Murphy, here is a broadened list of works by Nelson Mandela that will help to better understand the complex and compassionate mind of one of the world’s greatest figures:

Mandela was one of many who penned vital texts about the impacts of apartheid in South Africa. Here are some additional authors who have provided invaluable insights and courageous narratives about the struggle to achieve human equality there:

Can you suggest any other literature or nonfiction works to add to this list?