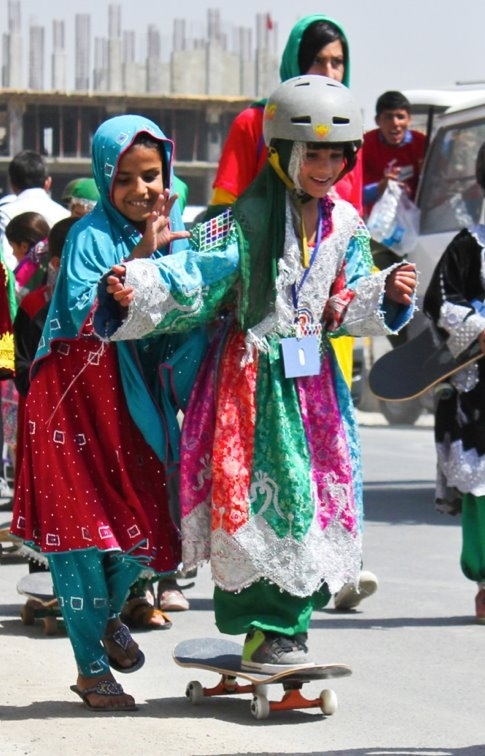 However, there’s a skateboarding school in Afghanistan where girls and boys both get to play.  Yes, the girls do wear headscarves, but they look pretty happy.  Skateistan is primarily a skateboarding center, but it also functions as a regular school for both girls and boys in separate classrooms. The center, which first opened in 2007, has grown to work with 400 kids per week.  Of those, 40 percent are girls.  Part of what the center does is work on “back-to-school” education so that displaced children in Kabul, Afghanistan, can get back into the public school system.  When you’ve been away due to poverty, being forced to go to work, famine, or war, you fall behind and need to get caught up to speed before reentering the formal education system.

Along with a creative arts approach, the students do multimedia presentations and learn about all sorts of educational topics including sustainable and renewable resources during the summer months.  The students take field trips such as one to the Kabul Zoo.  Their curriculum sounds very similar to one you might find in the United States, but the main difference is that many of the students come from families that do not have access to formal education.  Less than half of the population of Afghanistan is able to read or write.  A staggering 68 percent of the population is under the age of 25.  Skateistan is combatting these challenges head on. 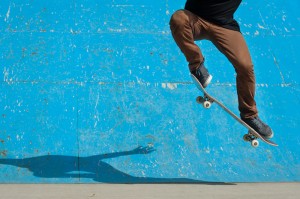 The students at the school are also exposed to all kinds of sports including basketball and volleyball, and both girls and boys are included in the sports curriculum.  Their favorite co-ed sport of all is skateboarding, a tool that the center uses to empower and create new opportunities for youth.  The girls are just as much daredevils as the boys.  Yet, they all wear protective knee pads and helmets, just to be on the safe side.

It’s inspiring to see the kids go off steep ramps and turn around half way up a ramp with ease.  The students could put a grownup to shame with their acrobatic stunts.  Best of all, the girls and boys are smiling, laughing and having a great time. According to one student, Hanifa (14 years old), “I always like to go high on the ramps.  When I’m up there, I feel free, like I’m flying.  I like that feeling a lot.”