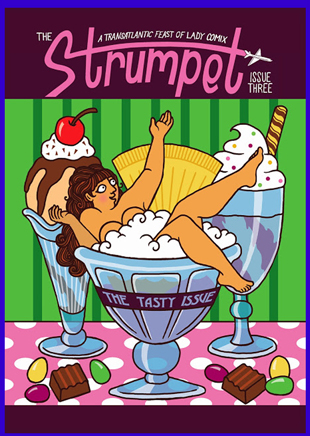 Cover art for the third issue of ‘The Strumpet’
Image: via Etsy

A recent report from Tim Hanley reveals that gender norms are shifting, albeit excruciating slowly, in the world of comics. The decidedly male-dominated industry has a history of showing little regard for female comic creators, with leading names like DC and Marvel employing minimal female staff.

Happily, there’s a new collaborative series of comics created exclusively by women, a series that is fighting to expedite the gender gap closure in the comic industry, and to highlight all of the seriously talented lady illustrators out there. It’s called The Strumpet, and it has everything you might want in a comic: wit, authenticity, style, and incredible illustrations. Conceived and edited by New York-based cartoonist, illustrator and writer Ellen Lindner, and Kripa Joshi, a Nepali-born illustrator and educator who lives in London, The Strumpet is a collection of short comics created by women from the U.S. and Europe.

In creating The Strumpet, Joshi and Lindner’s vision of uniting female illustrators from around the globe, and amplifying their talent, has been realized. Each issue is centered around a particular theme, but the content and comics inside represent the unique styles of the female illustrators who collaborated to make it come to life. As Mey of Autostraddle explains, “In a time when DC and Marvel comics each have less than 15% of their artist and writer positions filled by women, it’s extremely refreshing and necessary for a collection of comics like this to exist. Not only does it give readers a place where we can find creative and talented ladies who make comics, but it also gives those ladies a chance to be published and get their names out there,” of the ways in which The Strumpet is breaking ground by pushing women to the forefront. 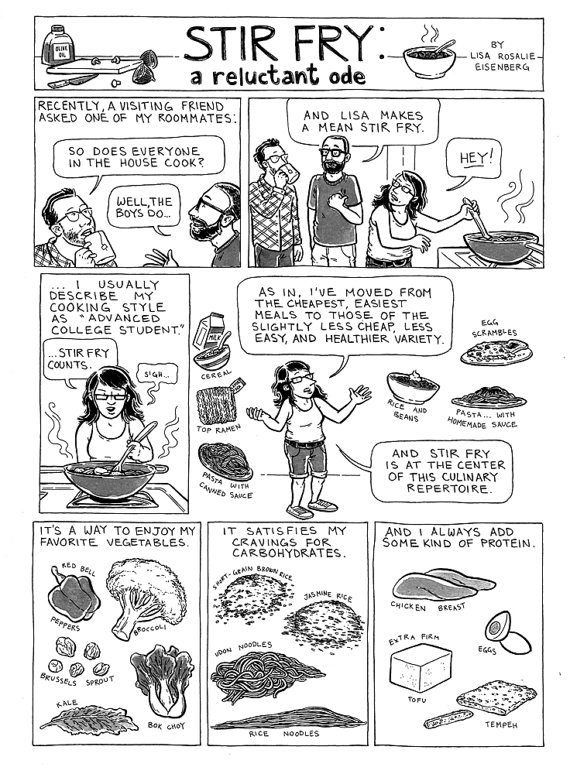 Comic by Lisa Rosalie Eisenberg in “The Tasty” issue
Image: via Etsy

Editors Joshi and Lindner explain, “We still feel that there’s a bit of a lag between the number of women we know who are doing comics (a lot) and those who are getting published (not always a lot). We think that the existence of more avenues for ladies to publish their comics can only be a good thing.” Indeed, creating a space where women can feel comfortable to share their artwork and ideas without feat of being evaluated because of their gender is a really, really good thing.

So far, three issues of The Strumpet have been released, including “The Dress-Up Issue,” “Going Places,” and the latest, called “The Tasty Issue.” Each issue is filled with a diverse range of styles and stories, and each showcases some of the best female illustrators out there. Learn more and support The Strumpet on Etsy.