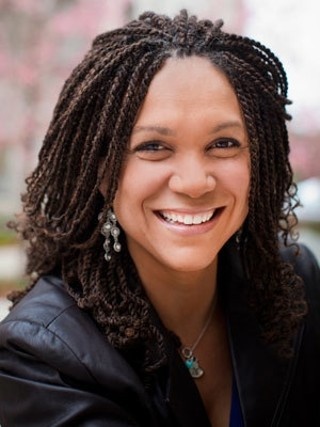 Melissa Harris-Perry is one of our very favorite leaders to an equal world. Harris-Perry is the founding director of the Anna Julia Cooper Project, a program that addresses gender, race, and politics in the South. She is also the author of Sister Citizen: Shame, Stereotypes, and Black Women in America, a widely acclaimed book that examines the contemporary stigmatization of women of color. She is a scholar and college-level professor in the fields of Politics and International Affairs, and her feminism and understanding of sociology are informed by the intersections of race and class in America, two factors that inform her work as host of the MSNBC show, “Melissa Harris-Perry.”

One of the greatest things about her work as a public figure is her ability to address issues surrounding people who don’t have much social access of their own. On her show she discusses current events, and explores the realms of politics, culture, art, and community. Harris-Perry also brings to light many social issues that affect myriad minority groups on a global level.

In one of her segments, “Open Letters,” Harris-Perry uses her platform to reach out to the 267 Nigerian girls that were kidnapped from school last month. The mass kidnapping has shaken the Nigerian people, and taken far too long to make international headlines. With influential public figures like Melissa Harris-Perry speaking out in their honor, it is our hope that America will find a way to effectively intervene and reunite them with their families.

Her open letter to the young women is incredibly moving, and seeks to prove that each and every one of their stories matters. Perhaps the most compelling section of the letter says,

Now there are reports that you are being sold off for $12 a person to your captors, being taken across the border, and trafficked into slavery. Twelve dollars? Your lives cannot be equated to a dollar amount. Because your potential is limitless. And now the drumbeat from those in your country and around the world are banging loudly so that you will not be forgotten. […] You have not been forgotten. We are sorry it took us so long to pay attention. But we are watching now, we are pounding the drums, because each one of you matter.

This is just one section of the impassioned open letter, which we encourage you to read in full. It is incredibly important to stay informed about these issues, and find small ways in which we can do our part to bring justice, safety, and equality to people all over the world who are treated so horrifically. We must keep taking about the kidnapped girls, their families, and how much they matter, so that the conversation encourages action, and that they may be brought home.

Learn more about Melissa Harris-Perry, her work and show by visiting melissaharrisperry.com.