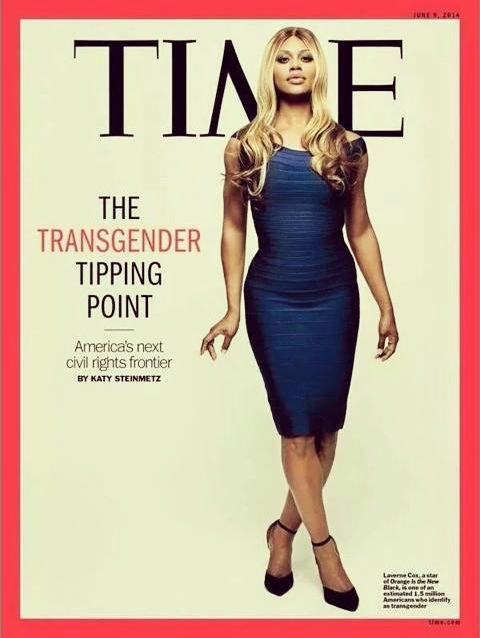 Laverne Cox, one of the most influential and visible contemporary transgender advocates, and one of our favorite “possibility models” made history today by becoming the first transgender woman to cover TIME Magazine. Talk about a wonderful birthday present, as the transgender actress and icon also happens to be celebrating her birthday today.

Cox’s TIME feature comes as a bit of a surprise, given her notable exemption from the magazine’s “100 Most Influential People” issue, which had fans and LGBTQ activists worldwide in an uproar. Cox, who received the fifth highest number of votes in TIME’s online poll, maintained her usual grace and composure throughout the scandal, thanking her supporters for recognizing the need for transgender visibility in mainstream media. “The Transgender Tipping Point” in many ways is TIME’s attempt at rectifying their now infamous exclusion of Cox, a formidable presence for equality and social justice, in their previous issue.

Despite what the editors at TIME deem “most influential,” there is no doubt that Laverne Cox has used her star power to make the world a better place for countless transgender individuals. She has used her time in the limelight to give voices to those who have not yet found their own; she has brought issues of race, class, visibility, and gender to forefront, forever changing the social landscape. She is one of the most influential figures in the world for her ability to create meaningful dialogue surrounding transgender identities that examine the layers of oppression that different people face. Perhaps most importantly, she has done so in an articulate, approachable way.

Cox wrote on her Facebook page earlier today, “I realize this is way bigger than me and about a tipping point in our nation’s history where it is no longer acceptable for trans lives to be stigmatized, ridiculed, criminalized and disregarded. This is for my trans siblings out there and for anyone who has ever been told that who you know yourself to be at your core is not legitimate. You are who you know yourselves to be.”

Happy birthday Laverne, and thank you.