‘Orange is the New Black’ Writer Lauren Morelli Comes Out 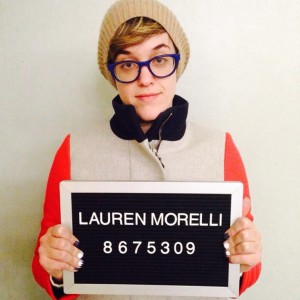 When was the moment that you first realized you were gay? How did you know? Who did you tell?

For the last year, these are questions that 31-year-old writer Lauren Morelli has had to navigate as she came out to her family, her now ex-husband, her colleagues, and most importantly, herself. A writer for the unbelievably popular Netflix series Orange is the New Black, Morelli has spent her entire life up until this point thinking that she was straight. It wasn’t until working with the remarkable cast of OITNB, a group of gender fluid, confident, compassionate women, and writing scenes in which protagonist Piper Chapman was forced to scrutinize her sexuality, that Morelli started to realize that something was missing in her own life.

Morelli recently came out publicly in a courageous and candid essay for PolicyMic, at one point explaining how “In any story worth telling, there’s conflict.” For OITNB’s Piper Chapman, personal conflict is what drives the show, and it is also, as Morelli has come to realize, something that has pervaded her own life as well. She writes, “Five months after my wedding, I flew to New York to start production on my first episode of Orange, and from that moment on my life fell into a parallel rhythm with Piper’s story in a way that went from interesting to terrifying in a matter of months,” of the way that her art began imitating her life in a truly awakening way.

Morelli and her experiences are important because they represent a coming out story that often isn’t told so honestly, if at all. Some people have even criticized her for the presumed pain she has caused her husband and family for not being true to herself, as if coming out is something that can be presented in a clean little box with safety instructions written neatly inside. Just like Morelli continues to find nuances in the characters she writes, she’s finding out new things about herself every day, and bravely sharing them in hopes of helping others realize that there is no such thing as “the right time to come out.”

“I am not perfect,” writes Morelli, of how hard it has been to come out to everyone in her life, including herself. “This is my story, which is messy and nuanced and a constantly moving target, but one I’m grateful for. I encourage you to embrace your own narrative, whatever that may be,” she says. “It will be worth the effort. I promise.”