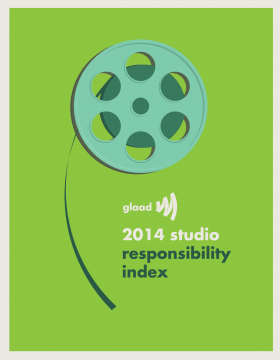 GLAAD recently released its second annual Studio Responsibility Index, a report that “maps the quantity, quality and diversity of images of LGBT people in films released by the seven largest motion picture studios during the 2013 calendar year.” This report is significant because it pressures major film studios to be more accountable when it comes to properly representing LGBT characters.

According to Max Gouttebroze, GLAAD’s Media Strategist, “GLAAD found that of the 102 releases from the major studios in 2013, 17 of them included characters identified as lesbian, gay, or bisexual.” In addition to merely tracking how many LGBT characters are represented in major films, GLAAD also examines the ways in which these characters are portrayed. “The majority of these characters were minor roles or cameos,” notes Gouttebroze, “and GLAAD found that many of these were outright defamatory representations.

GLAAD’s CEO and President Sarah Kate Ellis explains, “The lack of substantial LGBT characters in mainstream film, in addition to the outdated humor and stereotypes suggests large Hollywood studios may be doing more harm than good when it comes to worldwide understanding of the LGBT community,” of the way that LGBT characters are often either invisible or horribly misrepresented in major motion pictures. With this in mind, it comes as little surprise that both Paramount and Warner Brothers received “failing” grades from GLAAD, despite their clout in the filmmaking industry.

Although Paramount and Warner brothers scored poorly in GLAAD’s Studio Responsibility Index, other major film studios managed to rank a little better for their more accurate, honest portrayals and inclusions of LGBT characters. 20th Century Fox, Lionsgate, Universal Pictures, and Walt Disney Studios all received “adequate” grades, and Studio Columbia was the first and only studio to receive a “good” score for its efforts to be more inclusive.

In a time when LGBT people’s voices, stories, and experiences have never been more visible, it’s time that media and film studios improve their lack of inclusion and do justice in their portrayals of marginalized characters. Hopefully, reports like the Studio Responsibility Index will promote more diverse and inclusive filmmaking and storytelling.

Learn more about the findings of the Studio Responsibility Index by visiting GLAAD.