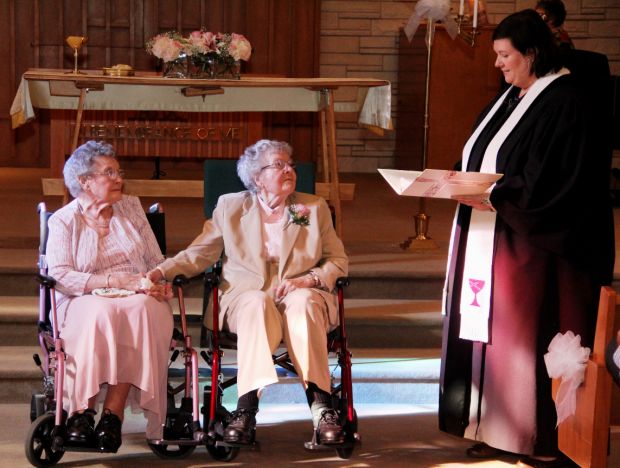 “Boyack, 91, and Dubes, 90, began a new chapter in their 72-year relationship Saturday when they exchanged wedding vows.” Image: via The Quad-City Times

Earlier this week, The Quad-City Times reported that longtime sweethearts Vivian Boyack and Alice “Nonie” Dubes were finally wed over the weekend at First Christian Church in Davenport, Iowa. Over the last few years, many stories about same-sex couples wedding after 10, 20, even 40 years of commitment to one another have surfaced. However, few of these stories of love and patience come close to the 72 years that Boyack and Dubes had to wait before finally being allowed to wed legally.

Writes Thomas Geyer for The Quad-City Times, “Boyack, 91, and Dubes, 90, began a new chapter in their 72-year relationship Saturday when they exchanged wedding vows,” of the ceremony officiated by Reverand Linda Hunsaker. Reportedly, during the ceremony Hunsaker told the couple, “This is a celebration of something that should have happened a very long time ago,” something that the couple, and countless others across the nation can certainly agree with.

Iowa first began permitting same-sex marriages in 2009, and is among only 19 other states that have legalized marriages between same-sex couples. The freedom to marry is one of the most controversial and prevalent debates happening in our country right now. Ever since the United States Supreme Court struck down the Defense of Marriage Act, a key victory in the fight for equal rights for gay and lesbian Americans, the battle for marriage equality has truly gained momentum. Social campaigns and activism such as Love Is Love, NoH8 and other inititiaves have created awareness about marriage equality, and have forced the American people and policymakers to take this issue seriously. These efforts have also allowed for commited couples like Boyack and Dubes to legally wed.

What do Boyack and Dubes have to say about their decades-long relationship? According to Dubes, “We’ve had a good time.”

Learn more about marriage equality, the fight for equal rights in America, and about other loving couples like these by visiting www.freedomtomarry.org.