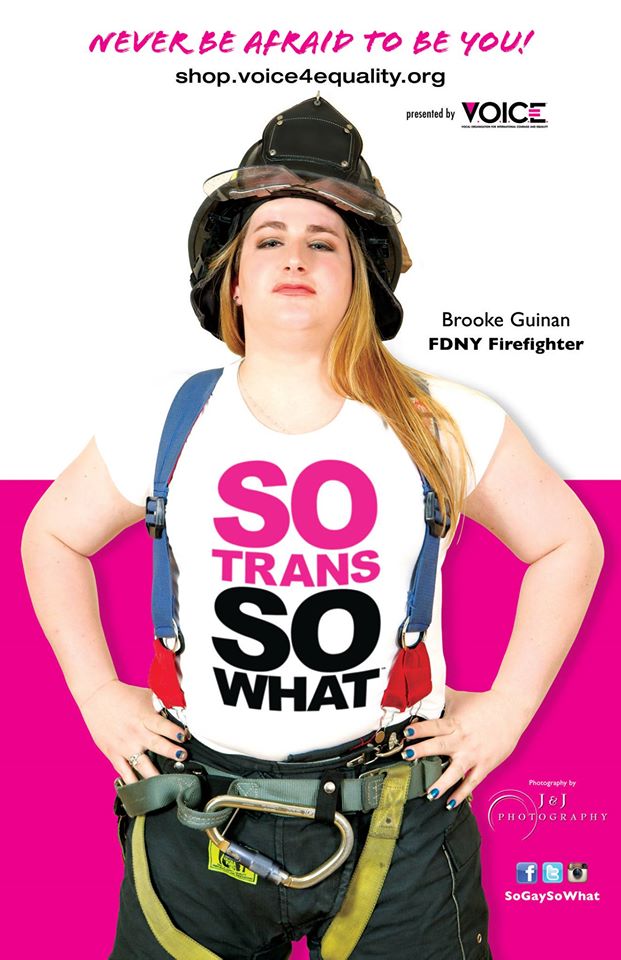 The Fire Department of New York (FDNY) hasn’t always been the most diverse environment as far as gender is concerned; reportedly, out of the city’s 10,000 firefighters only 41 are women. Happily, this is starting to change, as the FDNY openly supported trans woman Brooke Guinan’s transition, and is finding ways to encourage more women and gender nonconforming people to join the department.

“Brooke Guinan is someone you’d probably think of as brave because of her position: she’s a FDNY firefighter,” writes Gawker Media’s Kat Callahan. “Others are praising her bravery for something else: she’s the department’s only transgender firefighter.” In addition to supporting her in her transition and work as an active firefighter in Astoria, the FDNY offered Guinan a position at headquarters working in recruitment. “As one of the few women firefighters, one of the fewer queer firefighters, and the only transgender firefighter she offers representation that the city has in abundance yet lacks in its agencies,” explains Callahan.

In addition to having a role that focuses on outreach and gender diversification in the FDNY, Guinan is also participating in the “So Gay, So What?” campaign created by the Vocal Organization for International Courage and Equality (V.O.I.C.E.). According to the New York Daily News, the campaign poster featuring Guinan proudly prompting the question “So Trans, So What?” has been V.O.I.C.E.’s most popular one yet. After its September 24 release, the poster was shared on Facebook and Twitter more than 6,000 times.

It is so important to have people like Guinan proudly advocating for equality in workplaces that have been historically dominated by cisgender men. “Most queer people think that being a firefighter, a cop, or having a government job is unattainable,” she said. “What a lot don’t realize is you can do it.”

Read more about this inspiring and courageous third generation firefighter in this feature from New York Daily News.