Technology has undoubtedly done many great things in the way of human communication. Because of email and social media, friends around the world can easily keep in touch. With the recent rise of dating sites and apps, romantic relationships are forever changed as people are discovering new ways to connect.

Despite the many positive effects of technology, things like dating sites are not without their dark sides. Although many people are meeting and dating because of apps like Tinder and dating websites like Ok Cupid and Match.com, countless women are also being harassed, stalked, and belittled by men online because of them. When faced with rejection, responses from men in this online space range from disrespectful and misogynistic to downright scary. 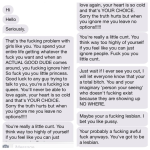 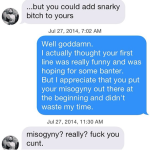 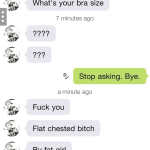 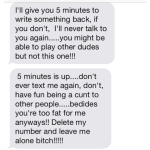 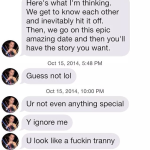 To raise awareness about this aggressive, highly oppressive male behavior, feminist Alexandra Tweten created @byefelipe, an Instagram account that posts screenshots of ridiculous and offensive online interactions. Tweten recently shared an explanation for the creation of @byefelipe, which was posted on Ms. Magazine’s blog. In it she writes:

My main reasons for creating the account were: A) Commiserating with other women (you can’t be a woman online and not get creepy messages from men); B) Letting men know what it’s like to be a woman online (it’s not all cupcakes and rainbows!); and C) To expose the problematic entitlement some men feel they need to exert over women in general.

Tweten, who has been “dating online as a feminist since 2010” has experienced first-hand the kind of harassment and verbal abuse that is directed at women who reject men on dating sites. In these spaces women are insulted, called names, threatened, and continually harassed. It happens all the time, and yet, hardly any mainstream journalism has addressed it.

It is the hope of Tweten and the @byefelipe community (which was already 246,724 strong on Instagram when this article was written), that misogyny in online dating spaces will be eradicated, or at least given the attention it deserves. When this happens, dating sites and apps will likely be forced to alter their policies to protect more women and take a stand against online harassment.