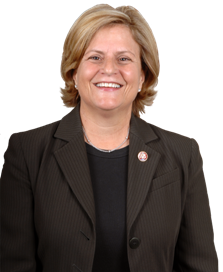 It’s always refreshing to hear about parents that were supportive of their children when they came out, and it’s even better when those parents happen to be high profile figures. Ileana Ros-Lehtinen, a Republican Congresswoman from Florida, has been called the most LGBT-friendly members of Congress. In a recent CBS interview with her and her transgender son, Rodgrigo, it’s easy to see why.

According to Mic, “Ros-Lehtinen has perhaps the most LGBT-friendly record among Republican members of Congress: She was the first Republican to co-sponsor a bill repealing the Defense of Marriage Act and founded the 112-member LGBT Equality caucus, where she remains the only Republican member,” of her efforts to advance LGBT rights and bring issues affecting the LGBT community to the forefront. Other prominent Republicans that have come out in support of LGBT rights include political consultants Ken Mehlman and Mary Cheney, and openly gay Congressional candidates Richard Tisei and Carl DeMaio, among others. Ros-Lehtinen is the only member of Congress with a transgender child, which perhaps makes her the most progressive in regards to transgender rights versus gay and lesbian rights.

In the recent CBS interview, Rodrigo Lehtinen, the Congresswoman’s transgender son, explained that though they have differing political opinions, he is lucky to have such a supportive family and a mother who is so progressive when it comes to LGBT issues. “I have full confidence she would have come to these pro-LGBT opinions whether I happen to be transgender or not,” he said. Of his own experience coming out as trans* Lehtinen explained, “I think that coming out as transgender is coming out as your authentic self, the person you always knew you were, but no one else may have known. And now you’re sharing that honesty with other people for the first time.”

Congresswoman Ros-Lehtinen’s answers regarding Rodrigo’s coming out are exactly what any LGBT person would hope to hear from progressive, supportive parents. In the interview she explained, “As parents, we wanted to make sure that Rigo understood that we were totally fine with it, and that we wanted to make sure that he was safe,” of her reaction after he came out as transgender. “We know Rigo as our child, whether it’s Amanda, or now as Rodrigo. He’s our son, and we’re proud of him.”

For more information about transgender issues and the political views of Ileana Ros-Lehtinen, be sure to visit Mic’s coverage of the interview.