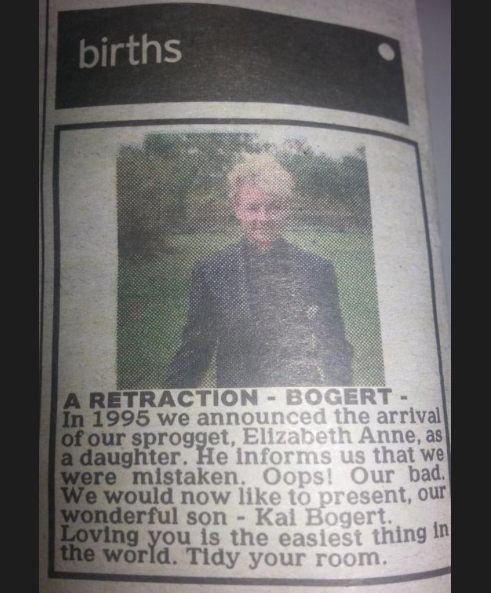 We love this “retraction” from Australian mother Yolanda Bogert.

At One Equal World, we like to celebrate the people who are constantly fighting for justice and equality, in ways both large and small. Just last week we wrote about how GOP Congresswoman Ileana Ros-Lehtinen is setting an example for parents (and politicians) everywhere by wholeheartedly embracing her son Rodrigo’s gender identity. This week, another example of progressive, supportive parenting comes from Queensland, Australia, where one mother has gone above and beyond to support her transgender son.

According to The Huffington Post, “Yolanda Bogert, of Jimboomba, recently took out an ad in the birth section of Australia’s Courier-Mail newspaper for her son, Kai, who came out to her as transgender last week. The ad was a combination retraction, announcement and symbol of love,” of Bogert’s positive response to her son’s coming out as transgender.

The “retraction” printed in The Courier-Mail reads:

In 1995 we announced the arrival of our sprogget Elizabeth Anne as a daughter. He informs us that we were mistaken. Oops! Our bad. We would now like to present, our wonderful son – Kai Bogert. Loving you is the easiest thing in the world. Tidy your room.

According to Bogert, her decision to create the ad and outwardly support her son was a “no-brainer.” This humorous announcement goes to show how easy it is to unconditionally love and support one’s child, regardless of their sexual orientation or gender identity. In 2014, coming out stories are still such a huge deal because LGBTQ youth know that their families and friends might not accept them. With more positive stories of love and support being shared around the world, hopefully more parents and families will find ways to encourage their LGBTQ children.

“I am still me but I am more me than I was a few days ago and feel free,” says Kai of how it feels to have come out as transgender to parents that love him unconditionally.

Read more about the Bogerts over at The Courier-Mail.