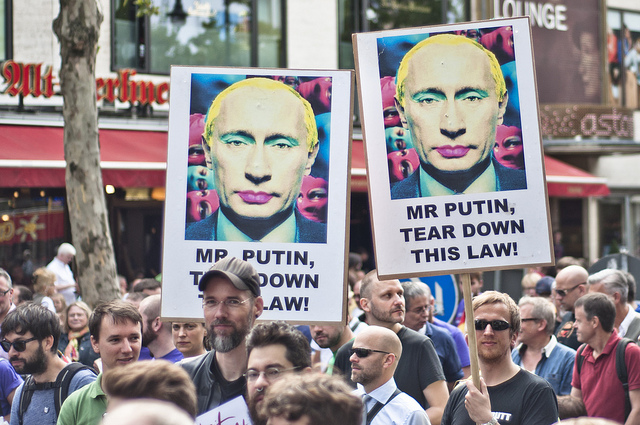 On August 31, 2013 around 5.000 people came together in Berlin to protest against homophobia and the anti-gay laws in Russia. Photo: Marco Fieber | Flickr CC.

Russian police in St. Petersburg have briefly detained several LGBT activists who held pickets in defense of equal rights on a Russian military holiday. Police earlier this month arrested Yuri Gavrikov, who was the leader of the LGBT rights group, as he left his home to picket in front of the renowned Hermitage Museum.

Police quickly took the gay activists away, even though the law allows one-person pickets without permission from authorities. Police accused Gavrikov of cursing on the street and he was held at a police station pending a court hearing.

Police took several other activists away after veterans of the Russian Airborne Forces confronted the protestors and started tearing their posters and banners. The veterans were infuriated as they gathered in Palace Square to celebrate the military holiday of Airborne Forces Day on Sunday.

“What they do here is not right, it’s terrible,” said Alexander Fadeyev, one of the paratroopers who confronted the activists. “We’re in Russia and not in America. Let them do what they want in America, but not in Russia.”

“Yes, I’m gay, and I have similar rights to other people,” said Russian activist Alexei Nazarov, who traveled from Moscow to stage a picket. Russia has been widely criticized for infringement on gay rights since Vladmir Putin had passed a law that prohibits “propaganda of nontraditional sexual relations” to minors in 2013.

The Russian authorities may try to ban gay emojis as their next assault on LGBT rights and alleged gay propaganda. It remains quite unclear what constitutes a gay emoji under Russian law.