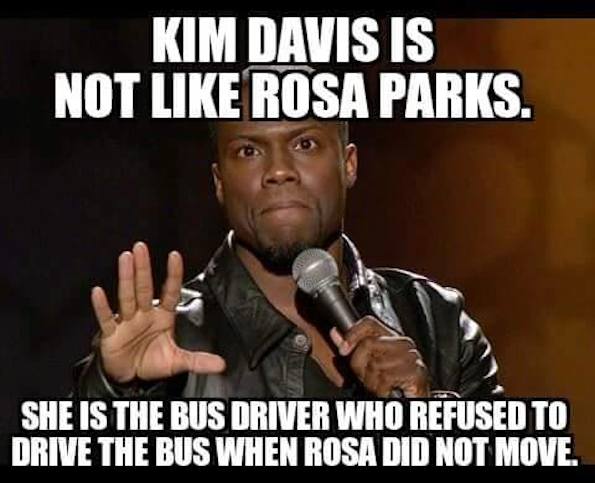 Religion and politics are inextricably tied together, especially in the Republican Party, which is in the beginning stages of the primary process that will determine who will be the GOP’s candidate in 2016. After the Supreme Court’s same-sex marriage decision was made during the summer, legal mind Kendall Coffey suggested that religious freedom would be the next great legal battleground. His words quickly became a reality across the country, most notably with the controversial Kim Davis situation.

One question that seemed unlikely at the beginning of the Kim Davis controversy: would the situation surrounding Kim Davis have any influence on the 2016 presidential election? However, as the process has dragged on (and candidates have voiced their opinions on the subject), the answer seems to be an unequivocal yes.

Here’s an update on the Kim Davis situation: Davis returned to work this week after having spent 5 days in jail for defying a federal court order. During this entire process, many appeals from unhappy couples have been filed, and Davis has sent many appeals to delay issuing same-sex marriage licenses. Currently, her stack of rejected appeals continues to grow and grow.

Before Kim Davis, the 2016 election cycle appeared to focus almost exclusively on the economy, jobs, national security, and foreign policy. The GOP generally excels in these areas; they even have an edge with Millennials voters. However, the Davis situation has dragged social issues back into the limelight, an area where Democrats tend to shine.

According to a September 3rd article from Think Progress, only 2 Republican candidates (Carly Fiorina and Lindsey Graham) were opponents of Davis, suggesting that she should do her job. Everyone else has come out in support of Davis. Trump eventually weighed in and tried to tow the middle line, though erring on the side of the law.

Before the last Republican debate on September 16th, many viewers and pundits were curious whether or not the candidates would attack each other on their stances surrounding Kim Davis. Unsurprisingly, the Davis situation (among other topics) was used among candidates to attack each other, notably front-runner Donald Trump.

So to answer our question: will Kim Davis influence the 2016 Presidential election? It appears that she already has. The next question we should be asking is: will she do any more damage to the GOP, or will her situation proof as a lightning rod for the eventual GOP nominee in 2016? We’ll just have to wait and see.