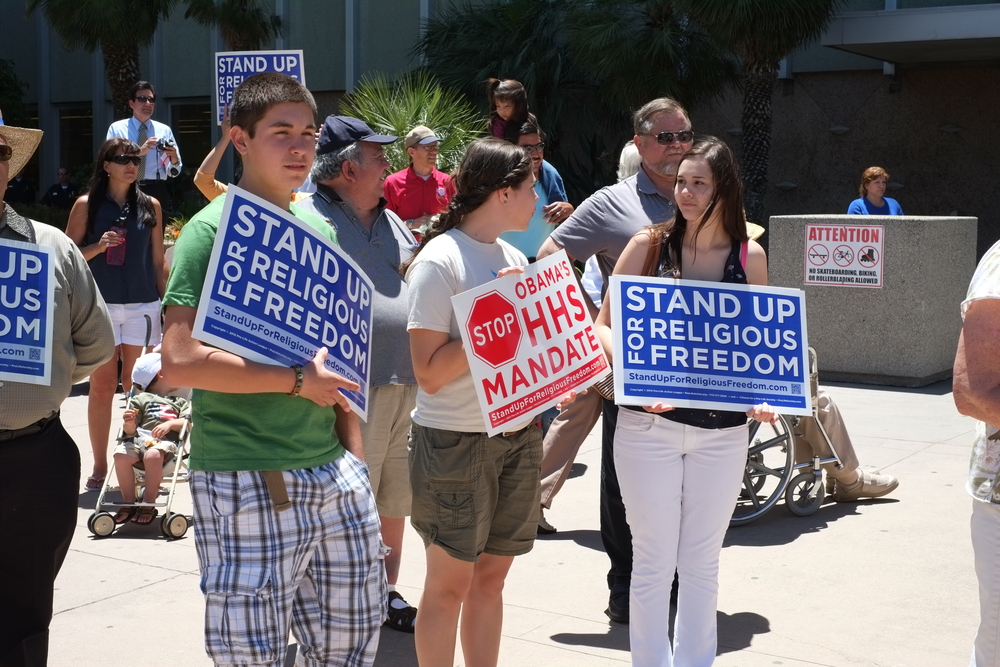 Quite a lot, legally speaking, as both issues are often subject to the scorn of parties who wish to deny them rights. Before now, federal courts upheld legislation that companies who wished to deny employees birth control under the umbrella of “religious objection” could be easily exempted from such legislation. But Thursday, a United States Court of Appeals for the Eighth Circuit panel, comprised entirely of Republicans, handed down a decision that allows religious objectors to refuse to comply with laws that would make them cover employee contraceptives.

Some people are taking a stand against religious freedom laws’ quest to deny rights to others, from gay or same-sex marriage to insurance coverage of contraceptives. A brief written by Ken Mehlman and amici in opposition to the upholding of religious freedom laws states that “no matter how strong, sincere, or longstanding these views, they cannot, under our constitutional system, serve as the basis for denying this class of people access to the institution of civil marriage in the absence of a legitimate, fact-based governmental goal.”

Judge Nina Pillard points to other flaws in a similar decision, Priests for Life v. The Department of Human Health and Services, like that there must be limits to what a company can deny to an employee. The language of the preceding brief relies on the notion that harm to third parties cannot be sanctioned by under the defense of religious liberty, which the new legislation clearly does.

The brief’s argument can, and should, be applied to the Hobby Lobby decision, which gave companies the right to deny contraceptive coverage to employees on the basis of religious objection. But decisions like these should not be made at the discretion of religious individuals. And if they are, it means that the government sanctions the religion which voices the objection—exactly what the law of separation between church and state was instituted to prevent.

Similarly, people like Kim Davis are also seeking relief from having to grant marriage licenses to gay and lesbian couples on the grounds of religious objection. But to allow people with religious objections to flout legislation that affects third parties directly and gives them no recourse, like simply going to a different church to get married or not-so-simply finding another job, is not in keeping with our nation’s values.

Though the decision handed down last week allows organizations to deny birth control coverage on the basis of religious freedom, there is still help for women affected by the ruling. In the Hobby Lobby case, insurance companies with religious affiliations can partner with the government to provide birth control for female employees in a separate, private policy not associated with that company.

But the recent ruling isn’t a happy one for many people who do not want their lives governed by someone else. Justice Sonia Sotomayer, a dissenter, fired back at her colleagues and just about accused them of being liars, arguing, “’Those who are bound by our decisions usually believe they can take us at our word….Not so today.’”