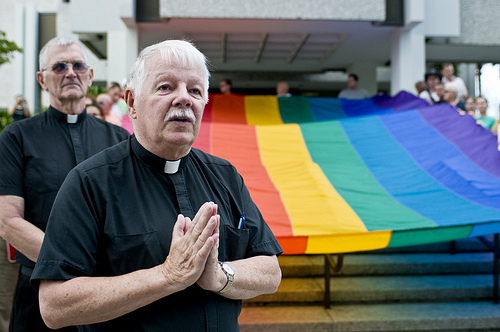 Father John Joseph Reid and Father Lawrence Turner are Catholic priests that fell in love with each other and married in Massachusetts. They now preside over the New Divine Mercy Catholic Communities. Photo: Danny Hammontree | FlickrCC.

While people consider Pope Francis to be relatively progressive, the Catholic Church remains conservative in many ways. Monsignor Krzyzstof Charamsa came out in newspaper interviews in Italy and Poland, where he is from, announcing that he was proud to be a gay man and that he was in a loving relationship with another man. The Vatican quickly dismissed Charamsa from his post, citing that the announcement was “irresponsible.”

Reverend Federico Lombardi, a spokesperson for the Vatican, argued that Charamsa’s statement was very serious, “since it aims to subject the synod assembly to undue media pressure.” As a result of the interviews Charamsa was dismissed from the Vatican and is no longer allowed to teach at pontifical schools, though he remains a priest.

Charamsa made his announcement just before Pope Francis gave his Synod on the Family; a major Church meeting intended to discuss its stances on family issues like contraception, homosexuality, and divorce.

Unexpected is Charamsa’s position in the Congregation of the Doctrine of the Faith, the body of the Vatican tasked with uncovering heresy and ensuring the Church adheres to the doctrine: the Congregation has historically been colored by its opposition to LGBT relationships and issues.

Though Pope Francis has focused his attention on things like climate change and poverty around the world rather than LGBT concerns, the Church remains as anti-gay as it generally always has been. Mixed reactions followed news of the pope’s meeting with embroiled Kentucky clerk Kim Davis, though the Church specified that the meeting was not to endorse Davis’ refusal to issue same-sex marriage licenses.

More and more Church workers are coming out. A Jesuit priest came out earlier this year and called on the Church to do better with LGBT people, and an Irish priest received much support after coming out to his congregation in Dublin.