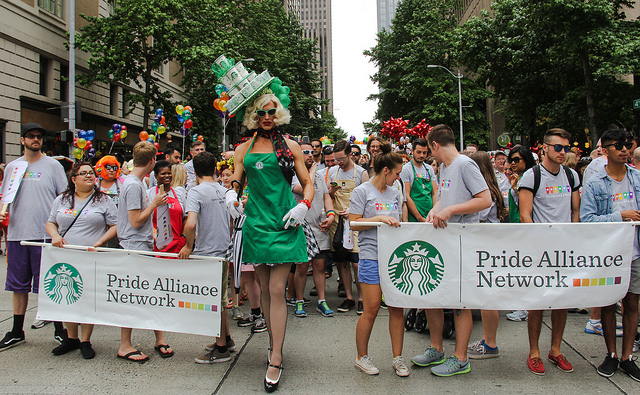 Starbucks workers appear in LGBT Pride parades across the country. Management told homophobic shareholders to sell out and move on. Photo: scottlum | FlickrCC.

It feels like every week, some company shows its LGBT colors. Here are a few companies that have shown their colors to be rainbow and supporting the LGBT community as employers or as community supporters and donors to supportive causes and initiatives. Some do it for profit, some for appearance but thankfully, some genuinely for the principal of LGBT equality and inclusion.

Apple: Run by CEO Tim Cook, who is gay and out. The company hosts its own Pride celebration and loudly supported the Supreme Court’s recent decision to make same-sex marriage a federal right. Does that balance out their poor human rights track record in overseas manufacturing? No, because it doesn’t work like that.

Doritos: Rainbow chips to celebrate the 5-year anniversary of the It Gets Better Project. Fantastic marketing opportunity for them, and they responded with class to a nasty consumer backlash and calls for boycott.

Starbucks: One of the most visible corporations marching in Pride parades across the country. Their employees must be accruing quite the stash of green t-shirts with cups in rainbow colors. They have actually put their money where their mouth is, telling homophobic shareholders to sell out and move on, and in 2014 they released a commercial with a same-sex couple which did not net nearly as much Facebook attention as Cheerio’s did.

Levis: Their jeans are the icon of the All-American lifestyle, and hopefully, someday their support will be too. The clothing company ceased their sponsorship of the Boy Scouts of America in 2014 due to their exclusionary practices, a fiscal blow to the nationwide club. You go, Levi’s, hit ’em where it hurts.

Target: Representative commercials, a rainbow clothing line, and public support of same-sex marriage are all forward steps, but what Target is really doing right is their trans-inclusive hiring practices. Not the bare-minimum of non-discrimination, but training for management in non-exclusionary language and respecting all genders. Now if only they’d offer that training to more of their customers.

Tiffany & Co: This luxury store is one of the bywords for romance, and this year for the first time one of their commercials features a gay couple. After all, why would they not want to tap into the newly legal market of same-sex wedding rings?