Filmmakers Want to Kickstart Our Understanding of Queer Japan 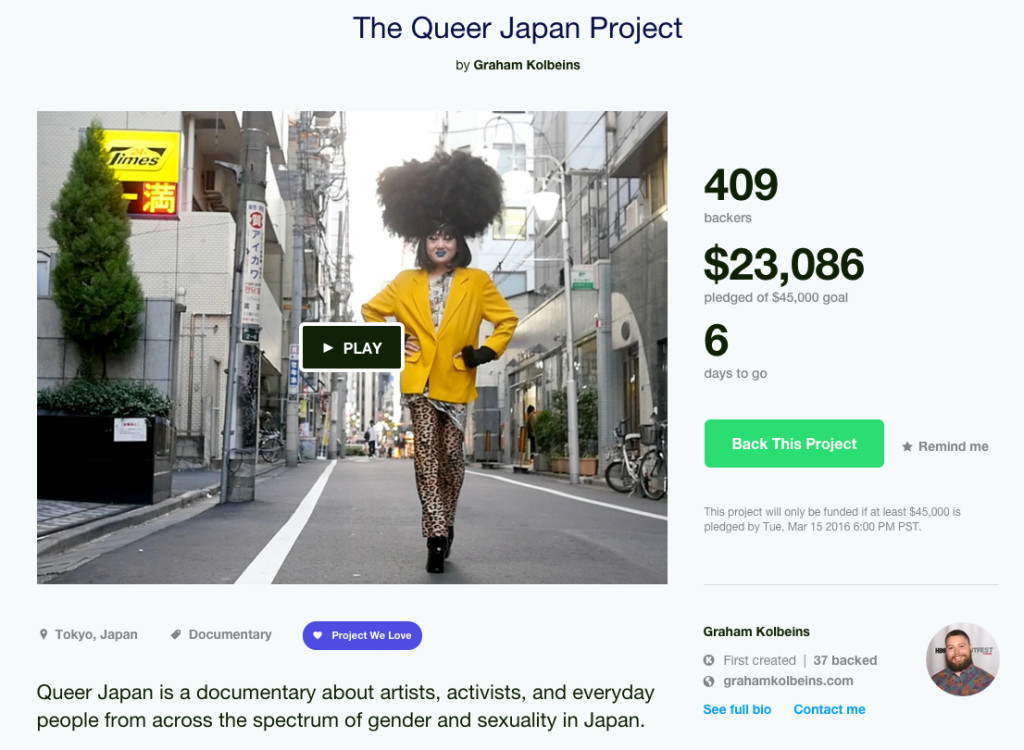 It should be no surprise that Japan has a varied queer scene. The shades of its particular rainbow are unknown outside the country. Director Graham Kolbeins and his co-writer Anne Ishii are ready to dive into that deep well to see what they discover.

Their documentary project, Queer Japan, is currently in the Kickstarter stage. If they raise their $45,000 target they will travel across Japan late this spring to meet with LGBT artists and activists representing diverse communities. Their mission is described on their Kickstarter page:

The Queer Japan Project is a multimedia documentary providing portraits of a diverse group of individuals from across the spectrum of gender and sexuality in Japan.

Artists, activists, community leaders, and everyday people will share an intimate look into the everyday triumphs and struggles of being a sexual minority in modern Japan. Through in-depth interviews and slice-of-life vignettes, Queer Japan will celebrate queer expression in Japan in many of its dazzling, prismatic varieties.

They’ve interviewed drag queen Vivienne Sato, gay manga master Gengoroh Tagame, and manko artist Rokodenashiko. She scanned her vagina, 3D-printed it 9 feet tall, made it into a kayak, and then got arrested for paddling it in public. That’s the vein in which they hope to continue.

Beyond the documentary, they hope to create a set of online videos, a traveling gallery exhibition, a zine, and a book of photography with bios of notable people. It’s an ambitious project.

“As a white foreigner, I think it’s important for me to take a step back from judging Japanese sexual cultures and forcing them into a false dichotomy with the West,” Kolbeins told the Huffington Post.

“Instead, let’s celebrate them! There is no singular queer Japan, but in this film we hope to show a handful of the many dazzling forms gender and sexuality can take.” And in the supplementary materials, they hope to show more.