Meet the First Gay Men to Publicly Marry in the Ukraine 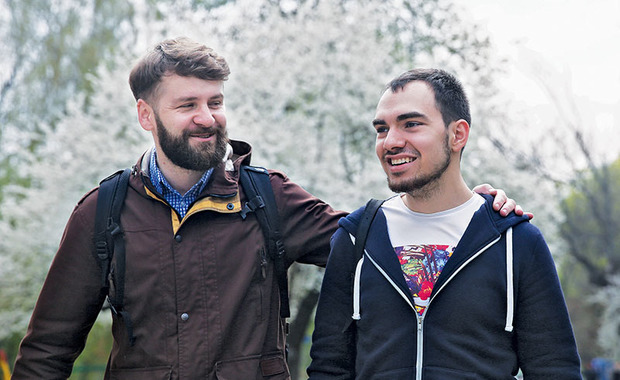 Ukrainian LGBT activits Zoryan Kis (left) and Tymur Levchuk enjoy a walk in Taras Shevchenko Park in Kyiv several days after their wedding on April 9th. They are the first gay couple to marry publicly in their country. Photo: Kyivpost | Kostyantyn Chernichkin.

LGBT historians in a future Ukraine may well regard April 9th, 2016 as a date of note. On that Saturday, the first visible gay wedding took place in Kyiv, Ukraine.

Zoryan Kis and Tymur Levchuk decided a year ago that they weren’t content to wait for the government’s approval. They would decide when they would marry. They became engaged, and now they’re married, in defiance of the foot-dragging progress on marriage rights in Ukraine.

While both grooms described their wedding ceremony, held in front of family and friends, as only romantic, the nature of their time and place cannot help but make it a political act.

Less than a month before, in the city of Lviv a few hours away from Kyiv, homophobic protesters forced the canceling of an Equality Festival. At least five attendees were assaulted and sent to the hospital, but no one was arrested.

Likewise, when conservative activists threw smoke grenades and fireworks at participants in a Pride walk in Kyiv last year. Kis and Levchuk, both activists for gay rights, were at that walk, though neither got caught up in the violence.

Despite stories like these, Levchuk says that Ukrainian society, in general, is not homophobic and that the violence of a few radicals works to the good, bringing more supporters to the side of LGBT people.

Despite the influence of neighboring Russia, where even to discuss non-straightness in a positive light is illegal, the doors of gay rights are slowly but certainly opening.

Levchuk and Kis are married now. In a few years, they’re certain that the law will see that.