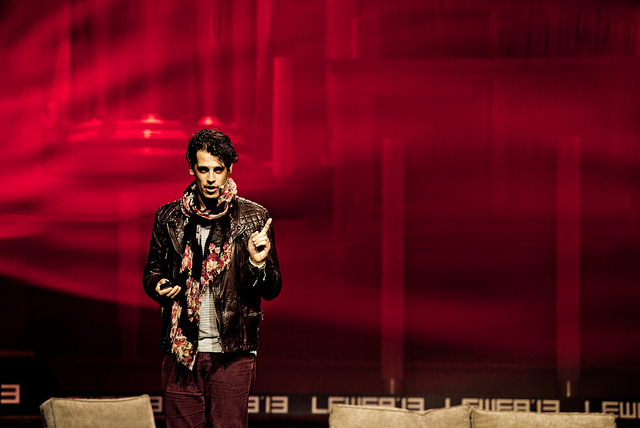 Milo Yiannopoulos is so desperate to become famous that he’s resorted to controversial publicity stunts. The Breitbart editor has gone on a “Dangerous Faggot” speaking tour in which he spews hate across college campuses. But you know what? If 15 minutes of fame is what Yiannopoulos wants, then 15 minutes of shame is what he’ll get.

And while that experience alone was already humiliating and hurtful in and of itself, Yiannopoulos felt the need to pour additional salt on the wound by making her the subject of his tirade. Kramer, who was in the audience, said that while she fully expected Yiannopoulos to make plenty of racist and anti-LGBT comments, she never in a million years thought that she would be his next target.

“I’m sitting there and I hear him say ‘Justine Kramer’ and I just froze up. I have never, ever, ever been more terrified in my life of being outed. Ever,” Kramer wrote in a letter to University of Wisconsin Chancellor Mark Mone. “And I am sitting there frozen in total terror that somebody around me would recognize me, point me out, and incite the mob of the room against me.”

But Yiannopoulos quickly dismissed her terror as an over-reaction. According to Yiannopoulos, it was all just a “joke.”

“If you can’t take a joke, how are you going to deal with having your dick cut off?” Yiannopoulos exclaimed at his most recent stop at the University of Minnesota.

But here’s the thing… it’s not a joke. What part of berating, harassing, and publicly humiliating someone is funny? It’s all fun and games until it happens to you. And so with great pleasure, we encourage all of you readers to share this article on social media to help Milo Yiannopoulos get the 15 minutes of shame he deserves.