Celebrating the Rise of LGBT Ads 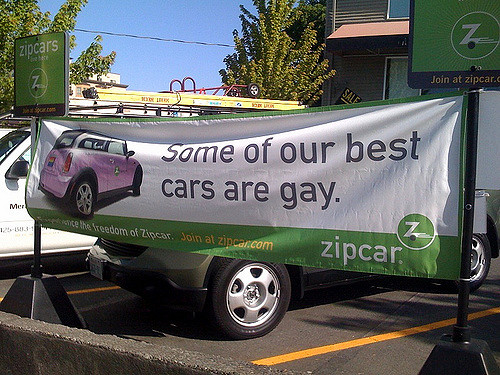 Lush, the chain of shops for known indulgent bath products, hasn’t had to advertise much in recent years. If you walk into a mall containing a shop, you know it immediately. The scent carries a blend of floral, fruity, and musky perfumes.

So why did they debut a new advertising line for Valentine’s Day? For an answer, perhaps take a look at the content of the two ads. Each one is just a couple, enjoying a bath together. They’re a bit silly, with bubbles and faces scrunched in laughter. They’re very innocent. And they’re queer. In a tongue-in-cheek acknowledgment that they were doing a controversial thing, Lush kicked off the campaign with a Facebook post about setting the record straight… on big tubs.

Another powerful ad came out in December, this one from Secret Deodorant. This company has been using its ad-space to tackle social issues for a while, from bullying to reversing gender roles. In their new ad, they show the stress of a trans woman using a shared restroom, and they do it with warmth and without any threat of violence and anger. Simply showing what should be.

A year ago, Campbell soup, in their first new ad push in almost a decade, included a gay couple and their son. They ignored the furor of conservative reaction, saying that they were simply showing life and family as it was, and have announced that all future ad pushes will continue to do so.

These seem like small things. They aren’t. Advertising is the tinnitus of our lives. It’s always there, a constant trickle of influence on every single consumer, world-wide. They are one of the many things we absorb that tell us what is normal, what is desirable, what is needed. And LGBT people are all three of those.