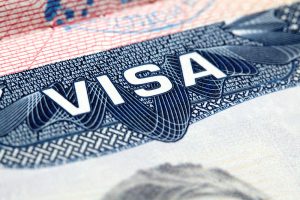 In 2009, Secretary of State Hillary Clinton wrote a directive informing all diplomats assigned to the U.S. that same-sex domestic partners should be eligible to accompany diplomats as family members to the U.S.

“The Chiefs of Mission are informed that, in addition to the categories of individuals previously accepted as family members, the Department has determined that the definition of ‘family’ forming part of the household of a diplomatic agent may include same-sex domestic partners… In accordance with guidance from the White House, the Department is not able to accept the accreditation of opposite-sex domestic partners as members of the family,” said the official diplomatic memo.

On October 1, 2018, the U.S. State Department—under the directive of the Trump administration—walked this back. They will no longer issue visas to same-sex domestic partners, citing equality, since opposite-sex partners could only apply for a spousal, or G-4 visa. Same-sex domestic partners already in the U.S. in diplomatic households have until October 31, 2018, to marry and apply for a spousal visa, or begin packing.

Samantha Power, a former U.S. ambassador to the United Nations, called the move “needlessly cruel and bigoted” on Twitter, pointing out that few other nations allow same-sex marriage. Only 25 in total, worldwide. Nearly three times as many punish same-sex relations by law, meaning that many diplomats serving on American soil expose themselves to tremendous risk if they marry here. Many more will find their lives legally very complicated, having married here, if they try to go home once their service is done to a country where their marriage is illegal but recognized by the U.N. This makes it a barrier to diplomatic employment for LGBT individuals.

The new policy was announced as an accomplished fact, with no opportunity for debate or public input, and only 30 days of warning before it will tear LGBT households apart.