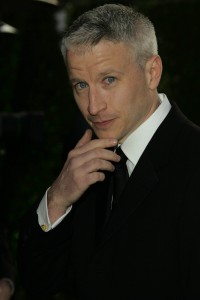 Anderson Cooper came out in 2012, and has become a powerful LGBT ally.
Joe Seer / Shutterstock.com

Also known as the “silver-haired fox,” Anderson Cooper has been captivating television audiences for years.  A long-standing career as a reporter has catapulted Cooper into superstardom.  Only recently has he come out as being openly gay.

Cooper got his start after graduating from Yale University and opting to work in reporting rather than pursue work at the CIA following a summer internship.

Unable to get his foot in the door, he worked as a fact checker for Channel One.  Eventually, Cooper decided to take matters into his own hands and got a friend to make him a fake press pass, which he took to Myanmar.  There he made a documentary about students fighting the Burmese government, which Chanel One passed on.

He then moved to Vietnam to study at the University of Hanoi and film aspects of daily life.  He sold this to Channel One and thus began his reporting in Bosnia, Rwanda and Somalia.

According to The New York Times, he is “the most prominent openly gay journalist on American television.”  Yet, for many years, this was something he kept secret.  He wanted to be known for his work rather than his sexual orientation.

However, on July 2, 2012, he allowed Andrew Sullivan to publish an email that partly said, “I’ve begun to consider whether the unintended outcomes of maintaining my privacy outweigh personal and professional principle. It’s become clear to me that by remaining silent on certain aspects of my personal life for so long, I have given some the mistaken impression that I am trying to hide something—something that makes me uncomfortable, ashamed or even afraid. This is distressing because it is simply not true…The fact is, I’m gay, always have been, always will be, and I couldn’t be any more happy, comfortable with myself, and proud.

Cooper has been open about the fact that he plans to marry his boyfriend, Benjamin Maisani in New York City.  The two have been dating since 2009.