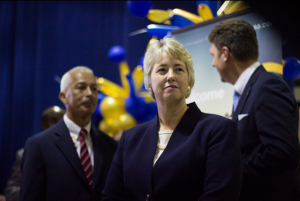 Annise Parker is the mayor of Houston, Texas. She also happens to be gay. And since being elected in 2009 (and then re-elected), she has made Houston the largest U.S. city with a gay mayor. That’s quite the feat in itself—not to mention Texas is a strongly “red” state with a history of being anti-gay.

When she ran for mayor, she focused on her experience with managing Houston’s budget rather than on her sexual preferences—and she won the city over. And when she won, she was overjoyed, saying, “The voters of Houston have opened the door to history. I know what this means to many of us who never thought we could achieve this high office.”

Parker has been advocating for LGBT rights for a long time. She was a founding member of the gay alliance at Rice University, and she and her partner have adopted three children. Parker had stated of Obama that he “needed to evolve” prior to his public support of gay marriage.

But her road to victory hasn’t been easy. She’s faced opposition from anti-gay groups who criticize her for being gay. They are “mortally offended that there is a lesbian mayor,” said Parker. She feels that she had to work much harder than she would have if she were straight and running for office.

But despite all the hurdles she has faced, Annise Parker is optimistic about the future of LGBT rights. She says, “This is a war that has already been won with young people. Full equality in this country is going to be in our lifetimes.”