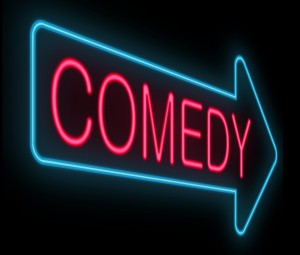 Jay Leno told Esposito she was the future of comedy.
Image: Shutterstock

Cameron Esposito is really, really funny. When she’s performing, there is an energy that comes from her that is impossible to ignore. She is incredibly likeable, honest, and relatable to the myriad women who enjoy comedy but feel alienated from this facet of entertainment by the rape jokes and misogyny that is all too prevalent in popular comedy.

Though she’s an up-and-coming comic, she has already made a name for herself during her hilarious and skillful recent appearance on the Late Late Show with Craig Ferguson, in which her quick wit and graceful composure rivaled that of the two seasoned comedians that sandwiched her on stage: Ferguson and Jay Leno. She was able to get laughs from two of comic icons, and when Leno told her “You’re the future [of comedy],” he meant it.

In many ways, Esposito is the future of comedy. She’s a strong, independent, queer woman who relies on her own experiences and intellect to create elevated humor. She doesn’t employ quick jabs at marginalized people to get laughs, and describes herself as a “purveyor of fine jokes,” bringing true talent back into an industry riddled with slapstick and profanity.

In the world of comedy, women have long existed as the butt of the joke or the punch line, which not only alienates female audience members but also sends a message to female comics: you’re not welcome. Cameron Esposito seems unconcerned by these norms, and is a role model to other women, who want to experience and create comedy that isn’t humorous solely at their expense. Esposito represents herself well as both a female comic and a lesbian; she often taps into both of those parts of her identity to create jokes that are formed from real-life issues.

In a sketch about same-sex weddings, she skillfully combats stereotypes about lesbian relationships by discussing her “double bride guide.” She asks and answers hypothetical questions, saying,

“How do I congratulate them on their engagement? (Like they are people.)
How will I know what to wear to the wedding? (They’ll tell you.)
Which one of them is the groom? (Neither. Clearly.)”

Her brand of humor is meant to entertain and offer a comical lens into real-life situations, which she delivers with sincerity. Her efforts to create more of a female presence in the world of comedy exist both on stage and off. Esposito created Feminine Comique, “a beginners foundation course that strives to give prospective female performers the confidence and skills they need to begin a career in standup comedy,” according to the program. The workshop is based in Chicago, and empowers participants to pursue comedy, preparing them for the gender barriers they may face.

Esposito is a growing force in the world of comedy, and she is bridging the gender gap that exists in that industry one joke at a time. She is a role model, a sincere artist, and a leader to an equal world.