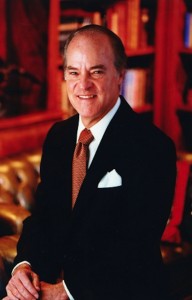 Henry Kravis is a self-made billionaire and number 92 on the Forbes 400 list. He is the co-founder of Kohlberg Kravis Roberts & Co. (KKR), for which he is Co-Chair and Co-CEO with George Roberts. Formed in 1976, KKR is a private equity firm that pioneered leveraged buyouts of companies. Kravis is considered one of the foremost experts on leveraged buyouts, private equity, and investment.

Having worked in the private equity industry for over 35 years now, Henry Kravis is extremely knowledgeable when it comes to economic patterns and predictions—both in the United States and around the globe. Through KKR, he has spearheaded some of the biggest company buyouts in history, including RJR Nabisco ($25 bn).

Henry Kravis earned his B.A. of Arts/Sciences from Claremont McKenna College and his M.B.A. from Columbia University. He is one of the biggest donors to the Republican Party and is a prominent face on Wall Street. He and his wife, Marie-Josée Kravis (President of MoMA’s board of trustees), are strong supporters of the arts.

Perhaps surprisingly, Kravis is also a proponent for same-sex marriage and equal rights. He has attended high-end fundraising events that included faces like Chad Griffin of the Human Rights Campaign, Paul Singer of the Manhattan Institute, and many other well-known figures on Wall Street. Kravis’s support of the LGBT movement puts him ahead of many of his fellow Republicans, who have been reluctant to add their support.

“If you don’t have integrity, you have nothing,” Kravis said. “You can’t buy it. You can have all the money in the world, but if you are not a moral and ethical person, you really have nothing.”