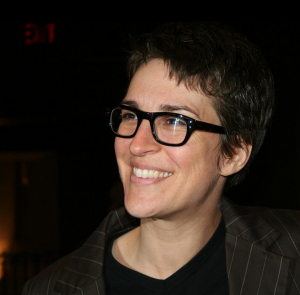 Rachel Maddow can win an argument. In an interview with AfterEllen.com in 2007, Maddow explained that “You have to learn to survive and prosper in a hostile environment…It’s kind of a talent that gay people bring to everything we do.” This talent has served Rachel Maddow well: after studying public policy at Stanford University, she was the first openly gay American to win a Rhodes scholarship to study at Oxford University. She began her career in the media after a friend convinced her to interview for a radio job, and she’s been a presence on the political scene ever since.

In 2008, MSNBC gave Rachel Maddow her own news show, and Rachel Maddow became the first openly gay anchor of a primetime news show. While outspoken about her political views, as a gay role model Maddow has lead by example. She’s changed the landscape of primetime news as, in her words, “an unusual-looking person” because she doesn’t fit what has been the feminized, idealized norm for female news anchors. She has been open about her sexuality her entire career because, as she explains, “I’ve been out the majority of my life. I could not go back in.”

Her open attitude, and the effect it’s had on the political media scene, has made a difference. She was voted the Lesbian/Bi Woman of the Year by AfterEllen.com in 2008; in 2009, Out Magazine ranked her 4th on their Annual Power 50 List; and in 2010, she won GLAAD’s award for Outstanding TV Journalism. Rachel Maddow has not only changed how people think of women on news shows; she has forced America to change how it thinks of fearlessly lesbian women.