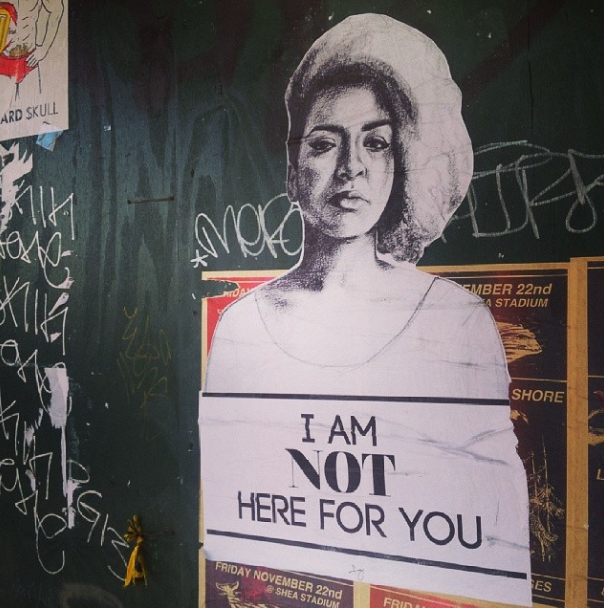 Tatyana Fazlalizadeh is on a guerilla-style mission to eliminate gender-based street harassment.
Image: tlynnfaz via Instagram

Tatyana Fazlalizadeh’s artwork is remarkably striking, despite its minimalist nature, and her portraits often carry socio-political connotations in their depictions of both public figures and unknown faces. The Brooklyn-based artist’s latest focus has not only been her most far-reaching artistic initiative, but also one that addresses the issue of gender-based street harassment and violence against women.

Street harassment is a serious issue that effects all people, but its implications create a particularly dangerous reality for women. Gender-based public harassment often draws attention to women’s bodies, and is a form of random aggression that by nature degrades, humiliates, and devalues the victim. More alarmingly, it allows for the perpetuation of a rape culture to continuously pervade our society. 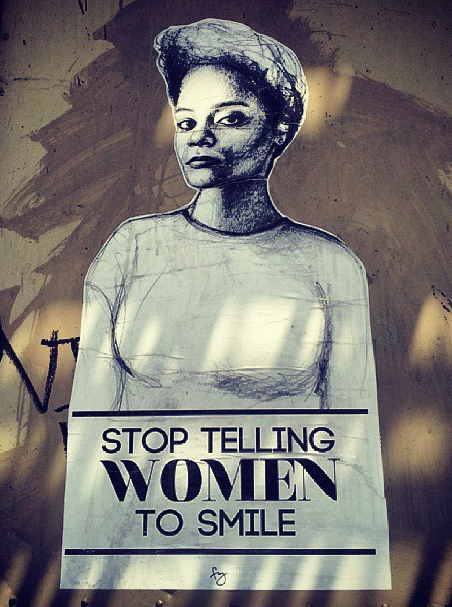 In “Stop Telling Women to Smile,” Fazlalizadeh has combined her incredible drawing skills with her ability to capture the most poignant human expressions to create a campaign that raises awareness about street harassment. Her campaign features portraits of women in commanding poses with captions that address street harassment culprits and empower victims and allies. The most crucial element of this project is that the images are displayed in public; Fazlalizadeh posts them in public spaces by wheat-pasting enlarged portraits to the sides of buildings and walls to spread her common message.

Some of the captions that Fazlalizadeh includes with her beautiful portraits include:

“Women are not outside for your entertainment.”

“My outfit is not an invitation.”

“Women do not owe you their time or conversation.”

“Women are not seeking your validation.”

“Critiques on my body are not welcome.”

Anyone who sees these messages is reminded that street harassment is not a form of flattery; rather it humiliates women who are made victims by aggressors that somehow feel justified in their unwanted advances. It must stop, and Fazlalizadeh is reaching out the best way that she knows how. Happily, her reach is more significant that she ever could have imagined, with “Stop Telling Women to Smile” garnering national recognition and portraits being reposted in cities all around the country.

On her website Fazlalizadeh writes, “It’s my hope that some women will walk pass these wheat pastes and feel empowered. That men will at least take notice and consider what the posters are saying. And that the conversation about street harassment will continue to be enlivened and hopefully produce some sort of solution.” While so far Fazlalizadeh has only focused on the experiences of women, with more support she hopes to expand the project to include men who have also experienced street harassment because of their gender presentation or sexual orientation.

Using public art to ignite social change is what makes Tatyana Fazlalizadeh a leader to a more equal world.

For more information about the artist and her activism, visit her official website.